Why did the Irish man swim the channel? 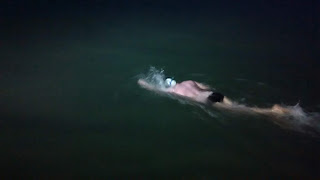 You might find yourself surrounded by jellyfish, in the middle of the separation zone, with Andy the boat pilot haranguing you for being a zig-zagging swimmer.

At times like this it's easy to question whose bright idea this was, what the fuck are you trying to prove anyway, and do you really believe that having a great big swim on your CV will tipp-ex over all of those years spent pissing about on the dole.
And the answer?  Just keep swimming.

For me, open water swimming is a set of loosely connected surreal moments, and applying factor fifty sunscreen in the moonlight at three in the morning as my boat made its way from Dover Harbour to Samphire Hoe is definitely one of them.  It may have been the nerves, it may have been the boat rocking, and it may even have been that the previous two days in the caravan were spent eating non-stop, but I was definitely feeling a bit queasy.  When the boat stopped at Samphire Hoe, I was to swim to the beach, get clear of the water, then the horn would sound and my swim would officially begin.  Less than halfway to the beach, I started puking.  Not a half-hearted retch between strokes, but having no choice but to adopt the fetal position as I spewed like a firehose underwater.  Could being violently sick right before the start of a big swim be considered a good omen? 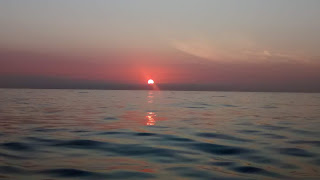 The initial swimming in the dark next to the boat was a bit disconcerting, but when the sun came up I got into my groove, and it became quite enjoyable.  I kept repeating to myself that I was doing my most favourite thing in the world, had a banging Womack and Womack track playing in my head, and my crew kept relaying uplifting messages from all the people who were tracking me back home.  There was no doubt that I was in my happy place, and I get to do this all day long!  Woo-hoo, go me!

Then at five hours in, I had to swim through jelly soup.  Five proper stings, but the one that really stood out was getting a big long tentacle caught in my armpit which stung my torso, arm, and neck simultaneously.  As bad as the stings were, they were a welcome distraction as everything was starting to hurt.  Then at six hours I noticed my pace dropping.  Then from seven hours on, the blue sky and sunshine were replaced with overcast conditions, and the sea got noticeably choppier.  Even though I was starting to feel a bit at sea (no apologies for that pun) I was able to reason that this was the wall, just keep swimming and it will pass.

The one piece of advice that really stuck with me was to not look back at Dover, nor to look forward to France, as the respective coastlines appear to stay the same distance away for hours on end and give the impression that one is not making any progress.  The thing I kept hearing again and again from channel swimmers is that they were looking at France for a good three or four hours before landing, and it really messed with their heads.  I had lost track of time (the hours and feeds all started to bleed into one another by now), but knew that I was in the water a good ten or twelve hours, and any time I dared to look ahead, there was no sign of the French coast.  At the next feed, John and Kate told me I needed to put down an hour of power.  I put the boot down and ploughed ahead, but was still in the middle of the sea looking at the grey sky.  Am I ever going to even get there?  Why ask me to do an hour of power if it's just to get from one spot in the middle of the sea to another spot in the middle of the sea?  Earlier I hit the wall, but persevered and got back into a groove.  Now I genuinely started to get despondent.  I trusted my crew, they told me that I was doing well, and on the next feed I asked: "Any idea of where I am?" They just said: "You're doing great, keep swimming!"  As much as I wanted to believe them, the doubts were really starting to take hold. 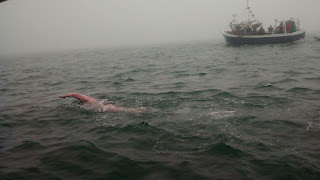 I was tired.  Everything hurt.  I had envisioned a target time for completing the swim, and that time had passed.  I tried going back to the old reliable motivational method of keep swimming until the next feed, and if I still feel like quitting, then quit.  I swam until the next feed and still felt like quitting.  And the next feed.  And the next feed.  The jellyfish stings had long washed out, and all I could feel was the muscular pain which kept accruing, never abating.  Whose bright idea was this?  What was I trying to prove?  Would anyone really think less of me if I touched the boat now and got out?  Could it be seen as a sign of personal growth if I decided to get out early rather than persevere in a vain attempt to get the world's approval?

Shortly afterwards (I say shortly, but time stopped having any real meaning a long time ago), I took another ill-advised forward glance.  Still no sign of France, but I saw a liner emerging from fog in the distance.  It wasn't overcast, it was foggy!  This meant that I might be a lot closer to the finish than previously realised.  Even though I still had no idea where I was, it gave me a bit of a lift, and I even started to feel vaguely optimistic again. 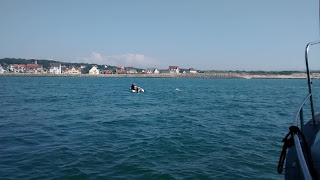 Then the fog lifted, the sun came out, and France was visible.  Even if there were four or five more hours of swimming ahead of me, I was beyond giving a fuck. The end was in sight, I was not in the separation zone, and there was a strong possibility that this godawful long day of horrendous swimming would eventually come to an end. There wasn't much left in the tank, but I put everything I had into a steady groove of just keep swimming.  I didn't bother sighting the coastline, and before I knew it, Andy was getting into the dinghy to guide me to the shore.

One of the things I used to lift my spirits throughout the swim was envisioning what it would be like to land on the French shore and then walk up the beach as a victorious channel swimmer.  A fellow distance week veteran, Big Jim from the US, got the Hollywood ending for his channel swim earlier this week.  He landed on a gorgeous sandy beach illuminated by the evening sunshine.  He dried off his impressive frame with a star-spangled beach towel, surrounded by loved ones who were all overwhelmed with a combined sense of pride, joy, and relief.  Just thinking about this now is making me well up and feel all gooey inside.

Being from a small town in the south of Ireland meant my ending was a lot less Hollywood.  I arrived at a rockier part of the coast, not a stony beach like Dover, but a big bunch of boulders protecting the sea front.  To end the swim, I had to clear the water with my whole body and that meant climbing on top of a big rock.  When I got into waist high water, I tried standing, but the previous hours upon hours of swimming had turned my legs into rubber.  After climbing a rock with the combined physical prowess of Bambi on ice meets Mr. Burns, I heard the boat's horn sound, and my swim was over.  A group of strangers on the seafront gave me a cheer, then Andy started bellowing at me to swim back to the dinghy.
No emotional fanfares or flourishes.  No epiphanies and no real ceremony.
The swim was over, now get back to the boat! 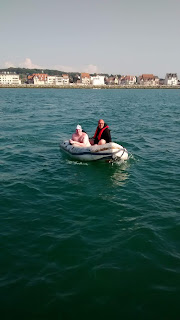 First off, massive thank you to John Carroll and Kate Steels-Fryatt for being the most amazing crew ever.  Not only did they keep me fed, but also kept my spirits up, and did a great job of relaying messages from social media.

Thanks to Andy and James King of Louise Jane Charters for getting me across, if you are thinking of doing the channel, look them up on the CSA website.

Tracey Clarke was an absolute legend as always, thanks for EVERYTHING!

Ned and Catherine get a mention for their work running Cork Distance Week every year, which is what put the daft notion in my head initially.

EVERYONE who swam with me to help build up the distance in the run up to the swim.

Normally there's a shout out to the haters, doubters, and naysayers, but there were none.  Everyone was so positive and supportive every step of the way, and that meant the world to me, thanks again!
Posted by Herringbone at 12:20 AM 5 comments: