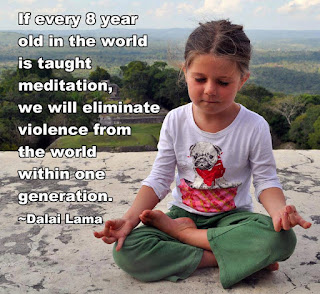 If you're reading this you are probably feeling pretty inspired, right?  You might even be feeling inspired enough to re-post this picture on your blog, facebook or twitter.  I think it is a wonderful sentiment, but I have a few creeping suspicions about it.

As much as I am a proponent of spirituality, meditation and all that jazz, I had the misfortune of being born into an academic household.  Academia is a lot like alcoholism: even if you don't become one yourself, growing up around it will leave scars on the psyche that no amount of counseling, crying or inspirational quotes can heal.  So unfortunately when I see this picture, my first thought is "Could you please show me the research which has allowed you to draw such a conclusion Mr. Lama?"  (My second thought is "What is in the puppy's speech bubble on the girl's shirt?  I bet it's both cute AND funny.")

To arrive to such a conclusion must have taken years of research.  That bit about "within one generation" suggests a longitudinal study of incredible magnitude.  This means teaching a group of 8 year olds to meditate, then observing the violence levels of that person over the course of 20-30 years.  To be properly thorough he would also need a control group of 8 year olds that were not taught to meditate, and, for proper academic rigour, he would have to have a third group who were actively encouraged to be violent.  Now things are getting interesting!

As this is a longitudinal study there would need to be numerous follow ups.  At twelve they could be left on a desert island with nothing but wild pigs and sharpened sticks to see what they'd get up to.  At fifteen they could be administered milk laced with adrenochrome while wearing bowler hats and codpieces, and if the experimental group don't descend into muggings and gang rape, the experiment could be considered a roaring success.

The age thing here is oddly specific.  Did he conduct this experiment with numerous groups aged between 6 and 12, and, for some reason the only one that worked was 8?  Were there wildly disastrous consequences when this was tried with 7 and 9 year olds?  Could this be the reason he was run out of Nepal?

If the statement is true, then the logistics would be a fucking nightmare.  As it is, every 8 year old in the world is not taught how to read, who is going to provide the resources to teach them to meditate?  Will it become the responsibility of the parent or the education system?  Is his Holiness going to launch a franchise of Lama approved facilitation courses to make sure your child gets trained by a certified meditation instructor?  What about screening for (potential) sex offenders?  "Say kids, you know what the first step towards enlightenment is?  Silence.  That's right, keeping your mouth shut and not saying a word to anybody..."

This could be solved by having parents and guardians supervise what's going on, but then we'd have the bigger and more annoying problem of the Meditation Mom phenomenon.   Soccer moms might be bad, but at least with soccer ability is quantifiable.  How well does the little one run up and down the pitch, does he get picked for games, and does he score goals or defend well consistently?  The thought of a group of middle-aged suburban housewives sitting around gabbing on about how their Caoileann has accumulated more good karma than next door's Kevin is enough to make my kidneys shudder.

Anyways, I am going to end it here; the last thing I want to do is piss off the Buddhists, mainly because they're such a blissful, forgiving bunch and it would take waaay too much work on my part to evoke any sort of outrage in them.  Here are some inspirational quotes that I came up with, feel free to look up little girl meditating on google images and add your own! 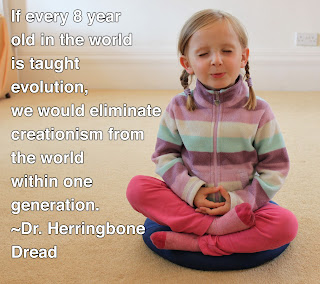 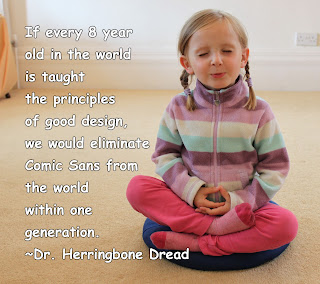 Posted by Herringbone at 2:32 AM No comments: