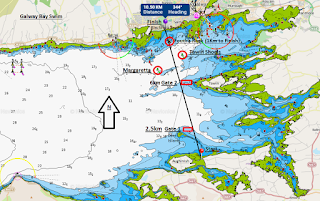 Last year a friend of mine was diagnosed with cancer, and it made me feel so frustratingly useless.  I wanted to do the Galway Bay Swim in aid of Cancer Care West, but knew there was insufficient time to get the training in and a boat organised.  Fast forward a year and she has had some life-changing surgery, and I was sufficiently fit to do the swim and on the waiting list to get a support boat.  As the weeks passed by with no sign of a boat materialising, I started mentally preparing myself for the possibility that I might not get to swim the bay this year, and that if it doesn't happen just suck it up.  Others who had done it previously said not to sweat it, they had gotten their boats only two or three weeks before the swim, just hang on in there as things have a funny way of falling in to place and all that.  Three weeks to go, two weeks to go, and one week to go all slid by and I was as boatless as ever.  Then on the Wednesday before the swim I got a call from one of the organisers asking had I found a boat yet?  Not yet, no.  Ok, try this number, his name is Sean, he might be able to help you.

Sean had a boat, and was willing to help me out.  I was in!

I took Friday off work to get checked out by my GP to make sure I was in adequate condition to take on the swim.  She had recently done the Lee swim with her partner, so it was less than five minutes of medical check up followed by a good half hour of talking about swimming.  After that I had to go to The Edge tri-shop to get spare goggles, water bottles, and a gigantic tub of High5 4:1 recovery mix.  On the way back I stopped off at Aldi and bought a small mountain of fatty treats, which were devoured within minutes of getting back home.  The logic was that these would be absorbed into my body (waistline) quickly, and then would be burnt off slowly over the course of the big swim the following day.  The science behind this is sketchy and made-up at best, but guilt-free binge-eating is always welcome.  This was followed by a half hour nap on the couch, which was extended to an hour and a half, and then it was a case of hastily packing up my shit and driving to Galway for the safety briefing.

The drive up and safety briefing went off without incidents, and there was a pasta party for the swimmers afterwards (sadly there was no games of pasta parcel).  When I went back out to my van, it turned out that someone had left the lights on and she was not starting.  My buddy John was on the way from Mullingar, so there was half an hour to kill until he could give me a jump start.  After a nice walkeen from Westside to Lower Westside, John rocked up and we hooked up the jump leads, gave it a minute or two to get some bit of charge going, and then ... ... ... nothing.  We tried this for a good while, but it just wasn't happening.  Someone had been leaving the lights on quite a lot of late, and the continuous need for jump starts had worn the battery out.  The good news was that I had a place to stay that night, so would not be sleeping in the back of a Hiace in a Westside car park.  The other news is that I would be leaving my van on its own in Westside overnight.

After a good nights sleep and a breakfast of porridge and more porridge, I went through my feeding schedule with John.  There was a two litre carton of double strength High5, and this was to be mixed with hot water from a flask for the feeds. First feed on the one hour mark, and then every half hour after that.  We looked at the map of the swim route, and I drew a circular motion with my finger, joking that this was the one thing I didn't want to do.  He dropped me off at the Salthill hotel where I waited for the bus, and he drove down to the docks to meet the support boat homies.  There was loads of time to kill, so I did a bit of walking on the prom, and Co. Clare was nicely visible on the other side of the bay.  The bus was right on time and brought us over to Aughinish where we could see the first wave of swimmers setting off into the fog.

The fog was a bit worrying, but after a few minutes it lifted a bit, and the support boats were visible.  This was great as it just meant sighting as far as the boats, and then follow the boat across the bay.  Then when it was time to get changed and I took my glasses off, the boats magically disappeared. On top of this, my (non-prescription) goggles had a smoky tint to them which further reduced visibility.  This was going to be a lot harder than initially anticipated.

We got into the water with the stately plump Martello tower on our left, and headed off when the horn sounded.  There were scores of compass jellyfish in the bay, floating around like souls of the damned.  I tried sighting but it was pointless.  I found myself drifting off the right of the group, but was ok with it as the dropping tide seemed to be dragging everyone to the left.  Eventually I found myself swimming on my own, and completely unsure of where I was going.  Never mind that.  Just - Keep - Swimming.  After an eternity of swimming a crew boat pulled up beside me, and pointed out that the Martello tower was now to my right.  I had succeeded in swimming around in a circle, and had not gotten beyond the first leg of the swim.

At this point I expected them to say "For fuck sake you've made a complete balls of this, just get out of the water now!"  Instead they guided me to the first yellow buoy, and from there on a nice guy on a jet ski said he'd accompany me until I got to my boat.  As I had no idea how much time was wasted perfecting the circle stroke, I just accepted that I was now out of the competition, that everyone in my wave was way ahead of me, so it was just a case of getting on with it and finishing the swim.  Eventually we got to the triangular buoy and there was no sign of my boat.  Mr. Jetski asked what my boat looked like, and I hadn't a clue.  After a minute or so of treading water, we decided to push on, Mr. Jetski saying he'd go all the way to the finish line with me if need be.  So with no support boat, and no feeds, I had no choice but to just keep swimming.

The psychological part of open water swimming is huge.  If those negative thoughts start creeping in about not being capable, they can very quickly become real, and then they can become true.  At this point of the swim, it occurred to me that all this shit going wrong was a sure sign that God hates me and was punishing me for some vaguely sinful aspect of my existence.  This could really doom me if it took root, so I changed my mantra from Just Keep Swimming to God Is Dead.  This put my head at peace, and shortly afterwards my support boat appeared.  If you ever find that prayer isn't working, I heartily recommend actively denying the existence of God, it's far more effective!

From here on in the water was rougher, but it was just a matter of keep following the boat until I got to shore.  The feeds were at half hour intervals and it broke the time up perfectly.  After a number of feeds John excitedly told me that there was only 1km left!  Brilliant.  I put the head down and kept swimming and swimming and swimming.  It didn't feel like I was making great progress, but assured myself that whatever was left was only hundreds of metres, so just keep swimming with long and strong strokes.  After a while I saw that John was preparing another feed, which could hardly be right.  When he threw the bottle at me, he apologised and said that now there is only 1k left, the last time was actually 2k.  After everything that had happened so far I couldn't be mad at him, lauged it off, put my head down and just kept swimming.

After some serious ploughing through waves the diving platform became visible, and for the first time that day I had a clear line of sight.  Fearing that there might be other swimmers close by, I put the boot down and hammered through the last few hundred metres.  A teenage paddle boarder sat with his back to me as I came closer to shore.  He didn't see me coming, but was in my way so I just tore through him.  I heard my name being called out on the PA as I climbed up the steps.  When I got to the top, someone put a towel around my shoulders, and I walked off to get dressed feeling like Elvis having just stepped off stage. 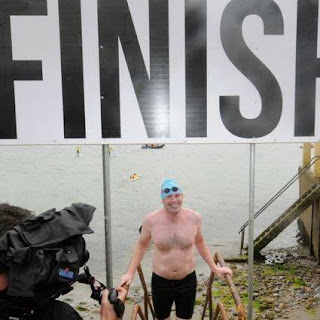 Thanks to:
John for being the greatest one man crew anyone could ever have asked for; Sean and the family Harte for the boat, dinner and the craic; Ned Denison and his torture week for getting me match fit; Gavan for the spare room the night before; Big L for the inspiration, support, and buns; assorted Sandycovers, Myrtlevillains, and Cork Tri swimmers for training with me throughout the year; and finally Friedrich Nietzsche for my new swimming mantra!
Posted by Herringbone at 6:07 AM